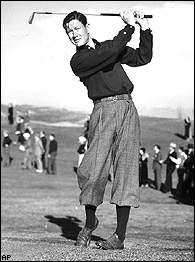 If you guessed a needlepoint, well, duh. Byron Nelson was one of the world’s most famous professional golfers. Peggy Nelson, Byron’s widow, invited fellow golfers to their ranch to look around, and here is something they saw:

The most noticeable item in the den hangs above the mantel. It’s a large needlepoint of the scorecard from Nelson’s 1937 Masters. Joan and Jake Keever, friends of Nelson’s, played golf with Byron many times and, during one round, Nelson decided he was tired of seeing Joan struggle in the bunker.

“After the round was over, he told her, ‘You’re going to go in this bunker and you’re not coming out until you’re doing what I tell you to do,'” Peggy Nelson said. “Byron worked with her for 45 minutes, but she got it. The next year, she won the ladies championship at her club. To thank Byron, she did the needlepoint. It was one of Byron’s favorite things.”