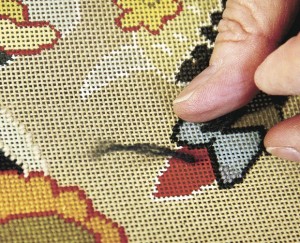 The national president of the American Needlepoint Guild, Pat Rogers, is pitching in to help restore faded needlepoint chair upholstery at the Blair House, the president’s guest house.

Among the home’s extensive furnishings is a wingback chair with needlepoint upholstery that originally was made by Teddy Roosevelt’s daughter-in-law. In time, the threads faded and became worn by use, and house conservators approached the American Needlepoint Guild in August 2010 about recreating the upholstery.